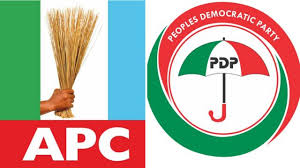 Barely 24 hours after the Peoples Democratic Party (PDP), took over power in Osun State, chaos and restiveness to have taken the centre stage.
This is why the Osun State chapter of the All Progressive Congress (APC) has called on the Inspector General of Police (IGP), Akali Baba Usman to urgently intervene in the ugly security situation in the State.
The party alleged that over 500 of its members have been attacked in the last 24 hours and a number of properties had been destroyed including  APC campaign vehicles, billboards particularly in Osogbo, the state capital.
In a statement by its Acting State Chairman, Tajudeen Lawal, the Osun APC said the return PDP into governance in Osun has marked the continuation of brigandage and political siege of yesteryears.
The statement reads in part: ‘’we knew since yesterday that the beasts of yesteryears have returned to power, but we never imagined the extent of the havoc they are currently wrecking in Osun in less than 24 hours after the inauguration. Today Monday can be best described as a black day for our dear State.
‘’We are seriously disturbed and concerned about public peace and order particularly the safety of our teeming members and supporters in Osun which has been under serious security threats since yesterday after the inauguration of Senator Ademola Adeleke as the Governor of Osun State.
‘’As at the last count this morning, more than 500 APC members have been attacked while a vehicle with APC campaign inscription was burnt in Ayetoro area of Osogbo. As at the time of issuing this statement, some of our party members have sustained various degrees of injuries and gun wound at Old Garage, Ogo – Oluwa in Osogbo, and the ongoing senseless attack has already spilled to Ile Ife, Ilesa, Iwo, Ede, Ila and Ikirun.
‘’It is regrettable to see how political thugs are openly displaying guns and shooting sporadically across the state, and sadly, some men of the Nigeria Police Force are providing shield for the criminals particularly in the attack that happened at Old Garage,  where Anti-Cultist Police unit team provided cover for hoodlums to attack innocent people in the area.
‘’It will be recalled that last week, we raised a concern about the subject matter that PDP have concluded plans to destroy our party campaign facilities and attack our members. Today, we are vindicated  because  the attacks were carried out in a pattern and manner we have noticed and reported to the police.
‘’We are not surprised because the hallmark of PDP and new Governor is violence and brigandage but it is very unfortunate that the era of locust is returning to Osun 12 years after,” the APC chairman said.
The party however called on the Inspector General of Police, the State Commissioner of Police and other security agencies to arrest the situation before it degenerates to full blown war saying Osun has been known for peace in the last four years under the administration of Adegboyega Oyetola

“What Some Men Do To Woo Me”- Nollywood Actress, Ayo Adesanya- Naijanewsdirect