The Councilor who represents Ward G in the LCDA was in the Ikoyi office of ICPC on Tuesday following an invitation by the anti-graft agency.

Based on petition, the agency is investigating the councilor for an alleged corruption and abuse of office in contrary to certain provisions of the constitutions of Nigeria.

A reliable source within the ICPC confirmed to SECURITY MONITOR that Ogunyemi turned himself in after a written invitation was sent to him. The source further confirmed his alleged crime of collecting double salaries from the state government for about five years.

SECURITY MONITOR findings reveal that Ogunyemi has been drawing public funds concurrently as a political office holder and as a public servant with the Lagos State Universal Basic Education, SUBEB.

Further findings depicts that Ogunyemi as a civil servant with Oracle Number;132138 gets monthly salary through his Polaris bank account number:1767634542. And at the same time gets paid as an elected councilor with his WEMA bank account number:0122746192 since July 2017.

This, according to a petition by LYGEL Youths and Leadership Initiatives, a civil society group, titled: CORRUPT PRACTICES OF MR. OGUNYEMI OLATUNJI, THE COUNCILLOR REPRESENTING WARD G, AGBADO-OKEODO LOCAL COUNCIL DEVELOPMENT AREA,ABULE –EGBA, LAGOS STATE: A CALL FOR THOUROUGH INVESTIGATION is a clear case of corruption which must be investigated and prosecuted. 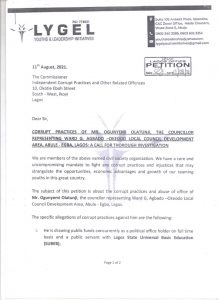 The petition dated 11th August, 2021 was signed by Olalekan Oladipupo, a legal practitioner and forwarded to ICPC alleges that Ogunyemi’s act of corruption is one of the reasons why there is non-availability of jobs for the teeming Lagos youths. The group charges the ant graft agency not sweep the case under the carpet as they opines that Ogunyemi has the backing of powerful forces within his political party. 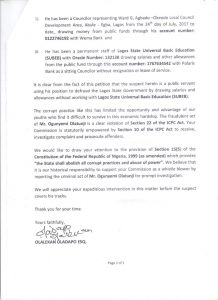 Senators Set For A Showdown With Lawan Over Appointment – Naijanewsdirect